How Do I Become a Christian?

Have you ever wondered what it takes to become a Christian?

Just going to church doesn't make you a Christian any more than standing in your garage makes you a car.G. K. Chesterton

I know men and I tell you that Jesus Christ is no mere man. Between him and every other person in the world there is no possible term of comparison. . . . Jesus Christ founded His empire upon love; and at this hour millions of people would die for Him.Napoleon Bonaparte1

Theories abound about what it means to be a Christian. For some, being a Christian is simply a way to distinguish themselves from atheists, Muslims, Hindus, or Buddhists. Others claim they are Christians because they attend church on Sundays and give money to the poor. Still others believe that being a Christian means following a spiritual to-do list, which, once completed, will earn them everlasting life with God.

The first-century historian Josephus recorded some of the first uses of the word “Christian” when he wrote of a “tribe of Christians, so named from him,” referring to the historical figure of Jesus Christ.2 This “tribe” was made up of those who fully identified themselves not with a religion, but with a person. These early Christians were so labeled because they founded their beliefs, their way of life, their words, and their deeds on Jesus’ teachings. Their lives were directed by and modeled after the life of Jesus Christ himself.

At the heart of the matter, a Christian is someone who finds his or her identity in Jesus Christ. As author, theologian, and atheist-turned-Christian C. S. Lewis wrote, “Every Christian is to become a little Christ. The whole purpose of becoming a Christian is simply nothing else.”3

Instead of finding identity, purpose, and value in their family, social status, or employment, Christians place their worth in their relationship with Jesus Christ.

To learn who Jesus is and how to have a relationship with him, Christians turn to the book that tells us more about Jesus than any other—the best-selling book of all time, in fact: the Bible. Written by forty different authors over the course of 1,600 years, the Bible is highly esteemed (by believers and nonbelievers alike) as a great work of history and literature.

As recorded in its pages, Jesus claimed to be the divine Son of God, whose purpose on earth was “to seek and to save the lost.”4

Most people today do not admittedly consider themselves to be “lost.” But the Bible often uses this kind of language when comparing humans to a lost animal, a lost coin, or a lost child.5 Christians believe that God is personal and created all human beings for relationship with Himself. But sometimes we tend to pursue meaning and purpose apart from relationship with God.

But what’s the big deal if a few people decide to shift their priorities and disengage from God?

Well, in the Christian understanding, it’s not just a few people—it’s all of us. As a result of Adam and Eve’s choice to disobey God and the subsequent birth of original sin, all human beings became susceptible to their sinful natures, vulnerable to their own selfishness, and prone to choose worldly pleasures over relationship with God. As the prophet Isaiah wrote, “We all, like sheep, have gone astray, each of us has turned to our own way.”6

As a result, God requires payment for those offenses in order to have that relationship restored.7 Much of the Jewish Law focuses on the appropriate processes of reparation for various kinds of sins. The Jewish faith provides parameters for all different types of sacrifices that must be made in order to become right with God again after one has sinned.

In the Christian understanding, Jesus came to earth as a fulfillment of these laws. Jesus’ death acted as the ultimate sacrifice—the ultimate gesture of God’s love—for all mankind, freeing us from the bonds of sacrificial laws and of sin. Fully man and fully God, Jesus experienced all that we experience on earth but lived a completely sinless, perfect life.

Though he had done no wrong, Jesus willingly died for us, taking on the sins of the world—including mine and yours—because he loved us. And through his resurrection, Jesus conquered sin and death, opening the pathway for each of us to have a direct, personal relationship with God the Father. This is the meaning behind the oft-quoted and arguably most famous verse in the Bible, John 3:16: “For God so loved the world that he gave his one and only Son, that whoever believes in him shall not perish but have eternal life.”

In Jesus’ sacrificial death on the cross, he shouldered the punishment that each human being deserves, allowing all people the opportunity to receive forgiveness from sin and eternal life with God.

Receiving this forgiveness and eternal life as a Christian means understanding and accepting two main points:

Christians believe that embracing salvation through Jesus Christ means accepting that failure is an inherent part of the human experience because it is impossible to live up to God’s standard. While that sounds terribly depressing, Christians feel that there is actually great freedom in being released from the to-do list of “earning” your way to heaven.

Being a Christian means believing that salvation comes not  from being on your best behavior, but from trusting that Jesus lived and died for you—so that you could have a personal and eternal relationship with God. As Norman Vincent Peale puts it, “The gateway to Christianity is not through an intricate labyrinth of dogma, but by a simple belief in the person of Christ.”10

Once you believe that Jesus’ payment is enough for your sin, it is only natural to want to grow in your knowledge and understanding of Christ and the Christian lifestyle. This is done by connecting with other people who have received Jesus as their savior; by reading and studying the Bible; and by communicating with God through prayer. 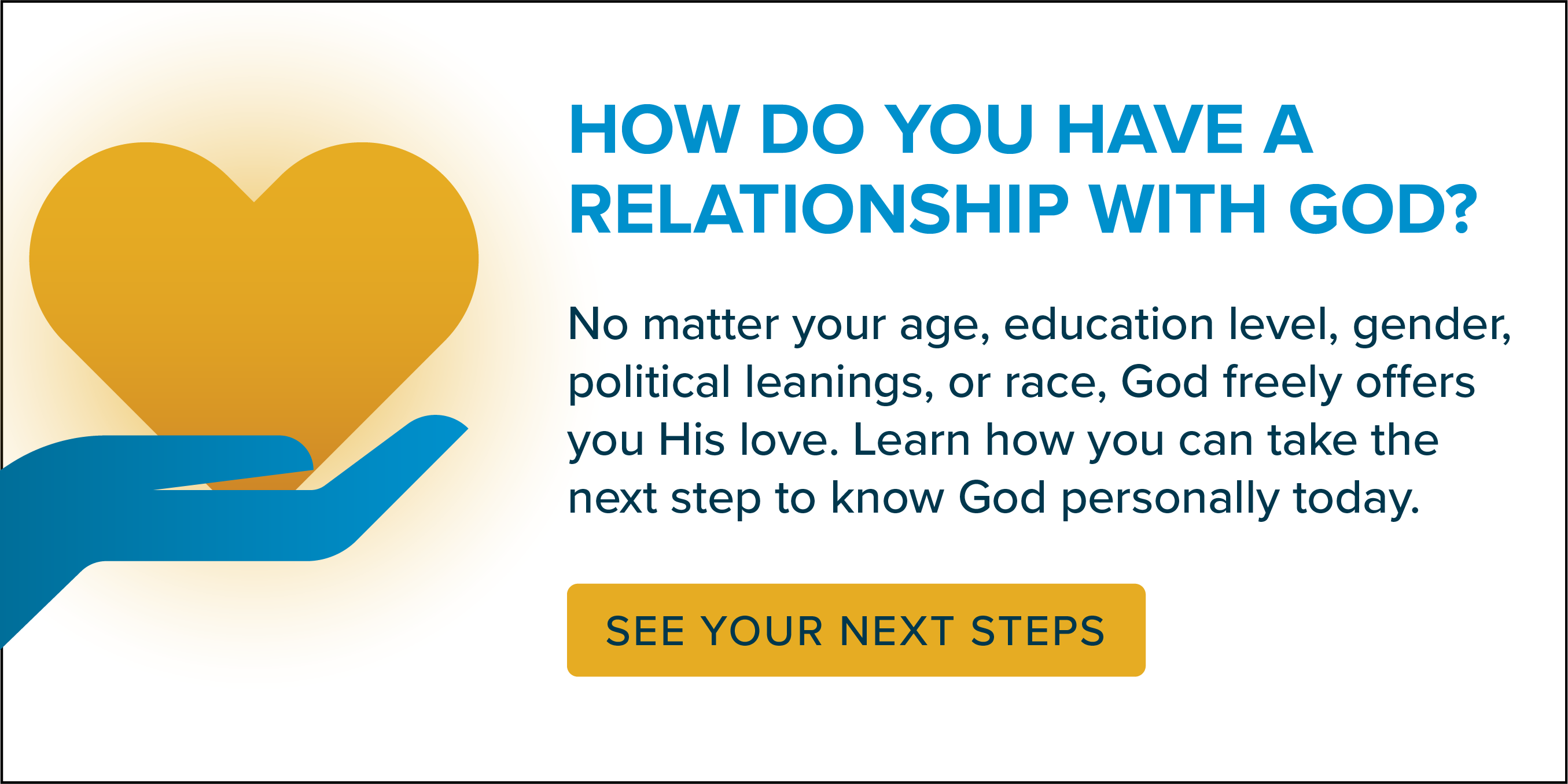 Copy and paste the code below into your website.

Cope with Isolation and Depression

Learn 3 ways to manage loneliness during the COVID Pandemic.

Are You Ready To Know God Personally?

Discover your next steps toward a relationship with God.

See Your Next Steps

Can I Know God Personally?

Putting Your Faith in God

Putting Your Faith in God

Our Identity in Christ

3:03
Our Identity in Christ