What Is the Meaning of Life?

Wealth? Fame? Power? Happiness? What about love? What's the meaning of it all?

Have you ever asked yourself in a moment of weariness or frustration, “Is this all there is?” Maybe you’ve become burned out in your quest for meaning—pursuing love, status, money, or excitement and coming up empty. Or maybe you’ve obtained what you sought, but the payoff isn’t what you thought it would be.

You just can’t escape your thoughts: Really? Is this it? What’s the point then? What is the meaning of life?

Ancient Middle Eastern history recalls one such unsatisfied searcher. His name was Solomon. He was a king; he had wealth, wisdom, land, livestock, wives, and power. Yet he was dissatisfied.

Summing up his privileged existence, he said, “Meaningless! Meaningless! . . . Utterly meaningless! Everything is meaningless.”1 In other words, “It’s all smoke. There’s nothing of substance here. Nothing satisfies. Nothing lasts.”

The man had everything this world has to offer! And he still thought it was all meaningless? Not very encouraging, is it?

Philosopher Peter Kreeft calls King Solomon “the first existentialist,” noting that he experienced “modernity’s greatest fear, which is not so much the fear of death . . . but the fear of meaninglessness, of ‘vanity’ . . . the fear of Nothingness.”2

When a man or a woman comes to the hoped-for end of all his or her striving and there is no joy, no satisfaction, no peace—then what?

Then, perhaps, God may come in.

If wisdom, pleasure, wealth, power, duty, service—even honor or religion—have left you feeling empty and unsatisfied, perhaps that’s an indicator that you were made for something more.

As C. S. Lewis once said, “If I find in myself a desire which no experience in this world can satisfy, the most probable explanation is that I was made for another world.”3 Can you identify with that seemingly insatiable desire?

What if the unfulfilled expectations, the disappointments, the unmet longings of this world were actually signposts, pointing you to something beyond yourself? And what if the meaning of life was not about the things we can get or what we can achieve, but about a love that supersedes time and place?

Jesus Christ said, “The thief comes only to steal and kill and destroy; I have come that they may have life, and have it to the full.”4 Christians believe that God wants each of us to have abundant life—good, fruitful, satisfying life—so much that he sent his Son to rescue and restore us from the world’s brokenness, and our own.

Within Christianity, the story of God’s love for mankind is called the gospel—which literally means “good news.” The gospel assures us that God made us, loves us, and wants a relationship with us. He wants to reverse the curse of sin and sadness, of futility and frustration, and draw us into a relationship with himself that begins now and lasts forever. Through the willing sacrifice and resurrection of his son Jesus Christ, who died on the cross as perfect and complete payment for our sin, the way to a personal and direct relationship with God was opened.

Christians understand this to be a gift from God to mankind. How do you make a gift your own? You receive it from the giver and “use” or appropriate it with gratitude and joy. We “get in” on God’s gift of abundant life by believing the gospel and receiving it by faith. As the Apostle Paul said, “It is with your heart that you believe and are justified, and it is with your mouth that you profess your faith and are saved.”5

Jesus tells a story in the Bible about an estranged son who returns home. You may have heard of it—it’s often called the parable of the prodigal son. In it, a young man asks his father for his share of his inheritance. Essentially, he cashes out and leaves home, determined to be his own man and do things his own way.

Using the money he received from his father, he lives a destructive and flamboyant lifestyle until he suddenly realizes he has nothing left. At the end of his rope—broke, hungry, and ashamed—he decides to go home and beg his father for a chance to work as his hired hand. There is no hope that he will be welcomed home as a son after what he’s done.

But his father surprises him. He sees him coming from a long way off and runs to embrace him. Before the son can finish his apologies and beg for scraps from his father’s table, the father fully restores him to the family and calls for a great celebration: “Quick! Bring the best robe and put it on him. Put a ring on his finger and sandals on his feet. Bring the fattened calf and kill it. Let’s have a feast and celebrate. For this son of mine was dead and is alive again; he was lost and is found.”6

You Can Come Home, Too

There’s no magic collection of words or phrases to recite to come home to God. But like the runaway son, we must seek with sincere hearts to be forgiven and delight in being restored. This involves telling God that you’ve wronged him by your willful wandering. Tell him where you’ve looked for fulfillment and failed to find it, where you’ve “cashed out” and gone your own way. Confess that you believe the message of his son, Jesus, and trust the sacrifice of Jesus to restore your relationship with God the Father. Ask God to forgive you, and then let him welcome you home.

Christians believe that the meaning of life is found in relationship with God, through the experience and acceptance of his love for us. Once that unconditional love is found, it gives all of life a whole new meaning. 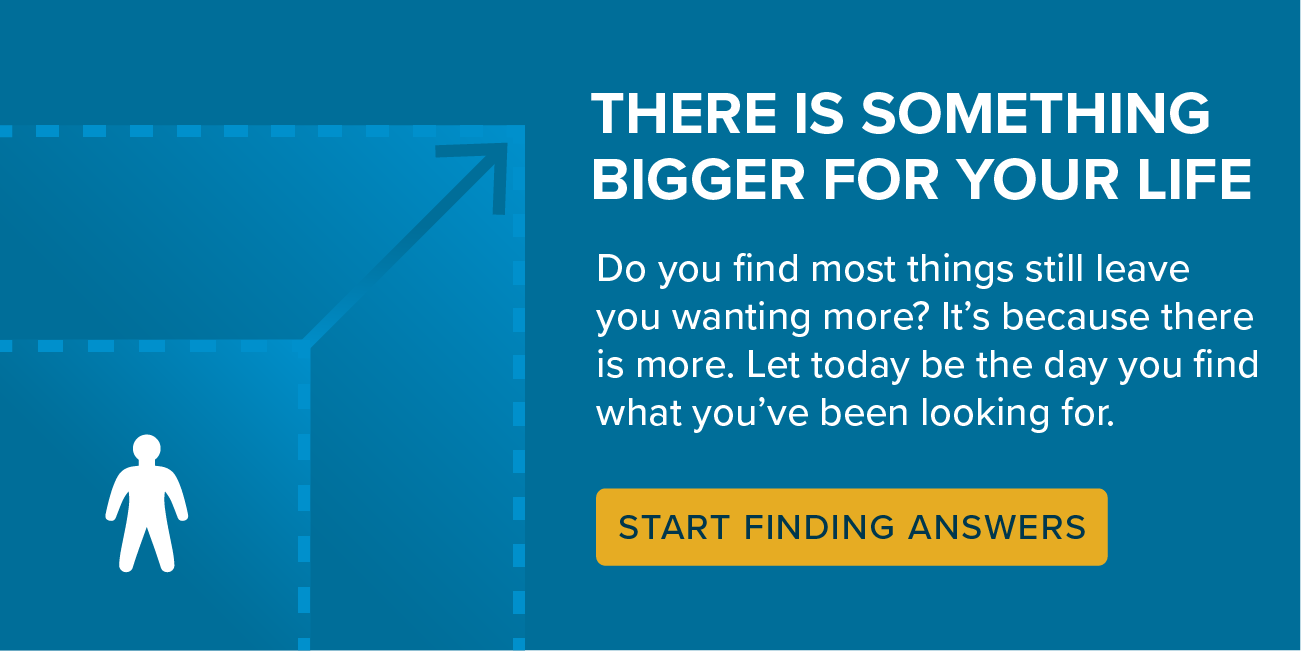 Copy and paste the code below into your website.

Cope with Isolation and Depression

Learn 3 ways to manage loneliness during the COVID Pandemic.

Are You Ready To Know God Personally?

Discover your next steps toward a relationship with God.

See Your Next Steps

How Can We Find Happiness?

What Is Speaking in Tongues?

What Is Speaking in Tongues?